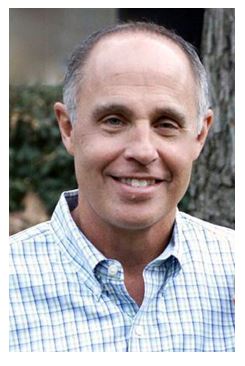 Dan Plackemeier graduated from Duchesne High School in 1976, second in a line of five siblings who are also Pioneers. Dan’s parents, Mel and Jerry, sent Mike, Linda, Jill, and Kathy to Duchesne as well.

Dan went on to play football and baseball at Central Missouri State, where he graduated with a business management degree in 1980. Dan and his high school sweetheart, Dawn Burkemper, married soon after his graduation. Dan then went to work in the family business, St. Charles Decorating. He and his brother, Mike, bought the business from their dad in 1987.

Dan’s dad, Mel, a devout Lutheran, was always a fan of Duchesne High School and took the kids to Duchesne games from the time they were little. Dan said, “When I was a little kid at St. Peter grade school, I always knew that DHS was where I wanted to be, not that I had a choice!”

Upon his entry to high school, Dan became fully involved at Duchesne: playing football, basketball, and baseball; serving as class president; and being active in the Key Club and the Lettermen’s Club.

That history of participating in sports and service laid the groundwork for how Dan would spend his time as an adult.  When his children were in grade school, Dan volunteered and coached in basketball programs through St. Cletus church and school, at the YMCA, and with several club basketball teams. He also coached both baseball and softball teams with the St. Charles Junior Baseball and Softball Association. The business he owns with his brother has sponsored many of these teams by providing equipment and uniforms, a tradition started by their dad years ago.

In terms of volunteering at Duchesne, Dan said, “I just like to help wherever I can.” And help he has! Dan has been very active in the Duchesne Athletic Boosters (DAB), which was originally founded by his father as the DHS Men’s Club. In 1985, Dan organized the first alumni basketball tournament, which continues as an annual event. In 2005, along with Sam Suthoff, Dan helped to organize the Boosters’ football lottery and he’s been an active supporter of that program ever since. The two also started the DAB BBQs around that same time. Dan also volunteers as the announcer at the scorer’s table at all home varsity boys and girls basketball games, even though he no longer has a student attending DHS. Without a doubt, Dan is one of the Pioneers’ biggest fans and one of Duchesne’s biggest supporters.

Dan’s commitment to Duchesne is constant outside of athletics as well. He and Dawn co-chaired the DHS Faith in our Future capital campaign with alumnus John and alumni parent Marie Covilli. That effort raised funds for much-needed school improvements, including air conditioning, technology upgrades, and better athletic programs across the board.

Dan modestly mentioned that he’s helped with some volunteer projects around the school. But one would be hard pressed to find anything in or outside of our hallowed halls involving paint that didn’t have Dan’s involvement in the project.

Though his three children – Brittany ’04, Zach ’07, and Morgan ’14 – have all graduated, Dan continues to “bleed blue.” His history of dedication to our greater DHS family is long-standing and unwavering. Both as a dedicated volunteer and 30-year business owner in our community, Dan emulates the Spirit of Duchesne with his warmth and compassion.

Dan’s sister Kathy Schmidt, one of his nominators for this award, shared this: “At many times in my life, people have said to me, ‘Your brother Dan is one of the nicest people I’ve ever met!’ I can honestly say that is his genuine personality. His life is busy and crazy like everyone else’s, but he would literally help anyone at any time if at all possible. He is a very positive person who always tries to find the best in others. He has always been a role model for me and continues to do the same for the next generation of our family.”