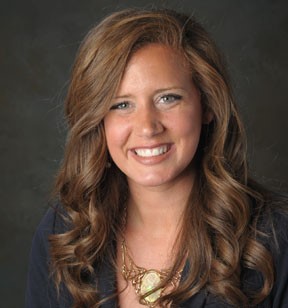 Holly Lammert is a National Sales Manager at Explore St. Louis. Holly graduated from Duchesne High School in the Class of 2008. While at Duchesne, she played Varsity Volleyball, Varsity Basketball, sang in the choir, was a Student Ambassador, and was a member of the National Honor Society.

After graduation from high school, Holly attended Missouri State University. In May 2012, she received her bachelor’s degree in Hospitality and Restaurant Administration. Throughout her college career, she was an active member of Alpha Chi Omega sorority, holding the position of Chapter President as a sophomore in 2013-2014. She then went on to serve as a member of the Panhellenic Council, the governing body over the sorority community, as Vice President of Membership Development her junior year. Holly was also a member of the Eta Sigma Delta fraternity, an academic fraternity that supported the hospitality community.

Immediately following graduation from Missouri State University, Holly was hired on as a Regional Sales Manager for Lodging Hospitality Management. The education and overall experience that Holly received during her time at Duchesne, really prepared her for college, and then beyond towards the development of her career. She was responsible for selling 8 hotels in the St. Louis area upon hire at LHM, and worked there for exactly 2 years, until being approached with an opportunity in the sales department at Explore St. Louis.

In July 2014, Holly accepted a position as an Executive Meetings Sales Manager at Explore St. Louis, and has since worked her way up the ladder to becoming a National Convention Sales Manager in the short two years she has spent at the convention bureau. She is responsible for selling the city of St. Louis as a destination for meetings and conventions to associations and organizations out of the mid-Atlantic region of the United States. During her time in this role, she was recently awarded the 20 in their Twenties award through the Professional Convention Management Association in January 2017.

For Holly, she truly believes that her success in her career, as well as her personal development with developing and building relationships, can be attributed to the education and spiritual attention that she gained while a student at Duchesne High School. She is proud to say that she attended Duchesne and has made lifelong friends that she still keeps in contact with from high school, as well as being a bridesmaid in several of their weddings.

For the Lammerts, attending Duchesne is a cherished tradition. Among the DHS graduates in her family are grandparents Theodore Lammert ’39 and Mary Lou (Jacobsen) Keely ’56, parent Paul ’75 and Dawn (Keely) ’77 Lammert, and sisters Lauren ’06 and Lindsay ’09 Lammert.