If your class reunion date is approaching, please contact the Office of Advancement at (636) 946-2603 or e-mail alumni@duchesne-hs.org to get started. For more information on planning your reunion, please click on the Tips and Venues links in the left sidebar.

The Class of 1972 is celebrating their 50th reunion at Duchesne on Saturday, April 9, 2022. Sunday-obligation Mass with music and a brief memorial for our deceased classmates will be held in Duchesne's chapel at 4:00 pm.  Reunion activities and dining will follow in the Performing Arts Center ("PAC" aka "the old gym").  We anticipate social time starting at approximately 5:30.  Invitations with an RSVP card will be mailed to classmates once all details are finalized.  Please contact Cathy (Wucher) Boschert at cathbosch@gmail.com with any questions or requests.  If you are from the Class of '72 and have moved within the past 4 years, please send Cathy your new address.  We don't want to miss anyone on this fun occasion.

The Duchesne Class of 1971 had a great showing for the 50th reunion, held in Duchesne's "PAC" (Performing Arts Center, aka "the old gym") on Friday, October 8, 2021. An enthusiastic committee transformed the PAC into a warm and inviting space for dinner, a memorial to deceased classmates, photos, games, music, conversation, and a surprise presentation by classmate Keith Boschert. 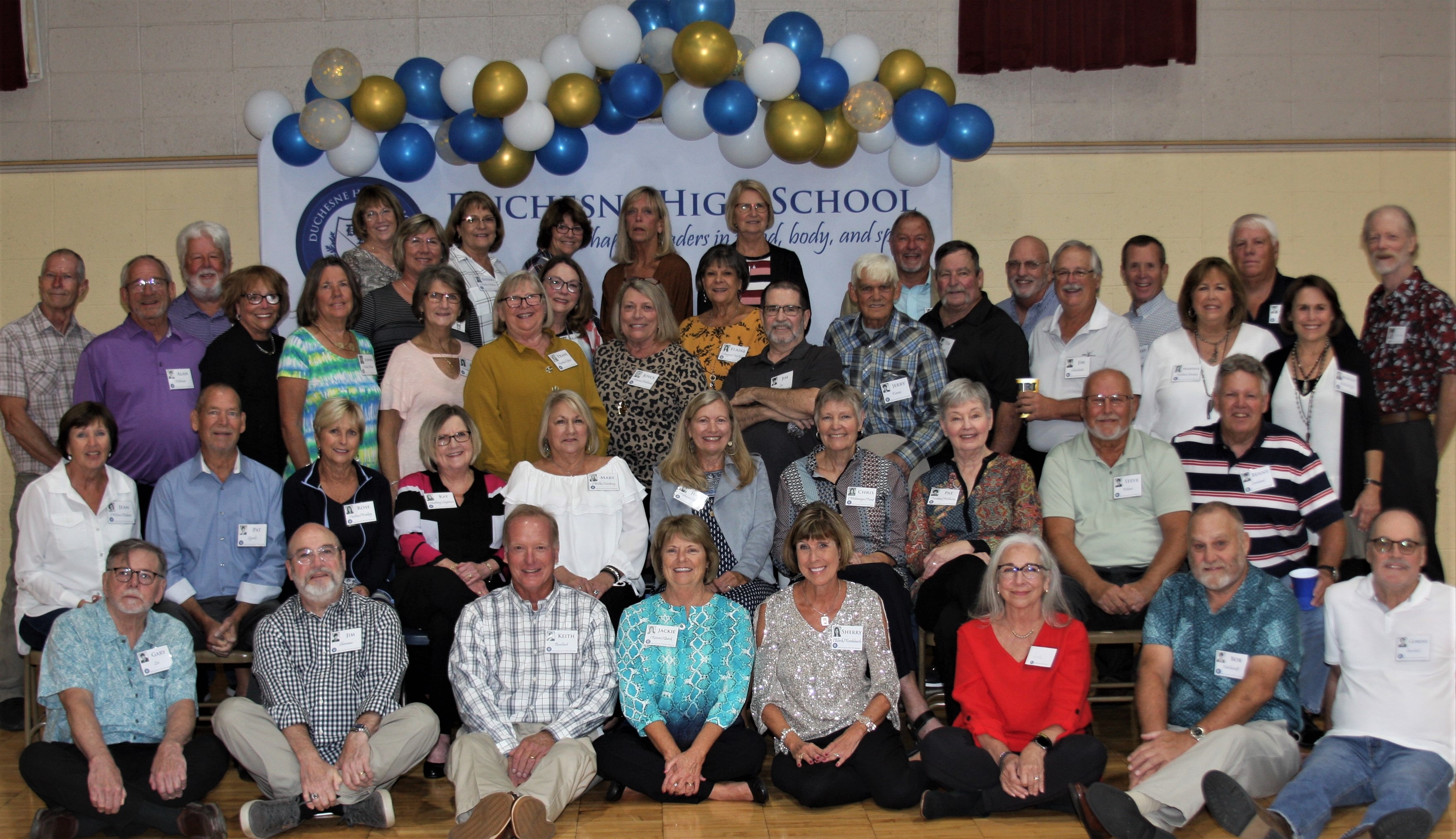 The Duchesne Class of 1976 gathered at the George F. Gould Building in Wapelhorst Park on the evening of Friday, October 8, 2021, for their 45th reunion. "The Spirit of '76" had a very lively and enjoyable evening! Thanks to Charlie Smith for being the primary organizer.

The Duchesne Class of 1969 enjoyed a multi-event 50th reunion weekend, centered around a class Mass and tour at Duchesne on Saturday, September 28, 2019, followed by a dinner party at Pio's.  Other activities included special seating at the DHS Friday night football game, followed by a gathering at the KC Hall (of course!); the MS Charity Walk on the Katy Trail and an outing at St. Peters Golf Club on Saturday morning; and brunch and the Cardinals game on Sunday. 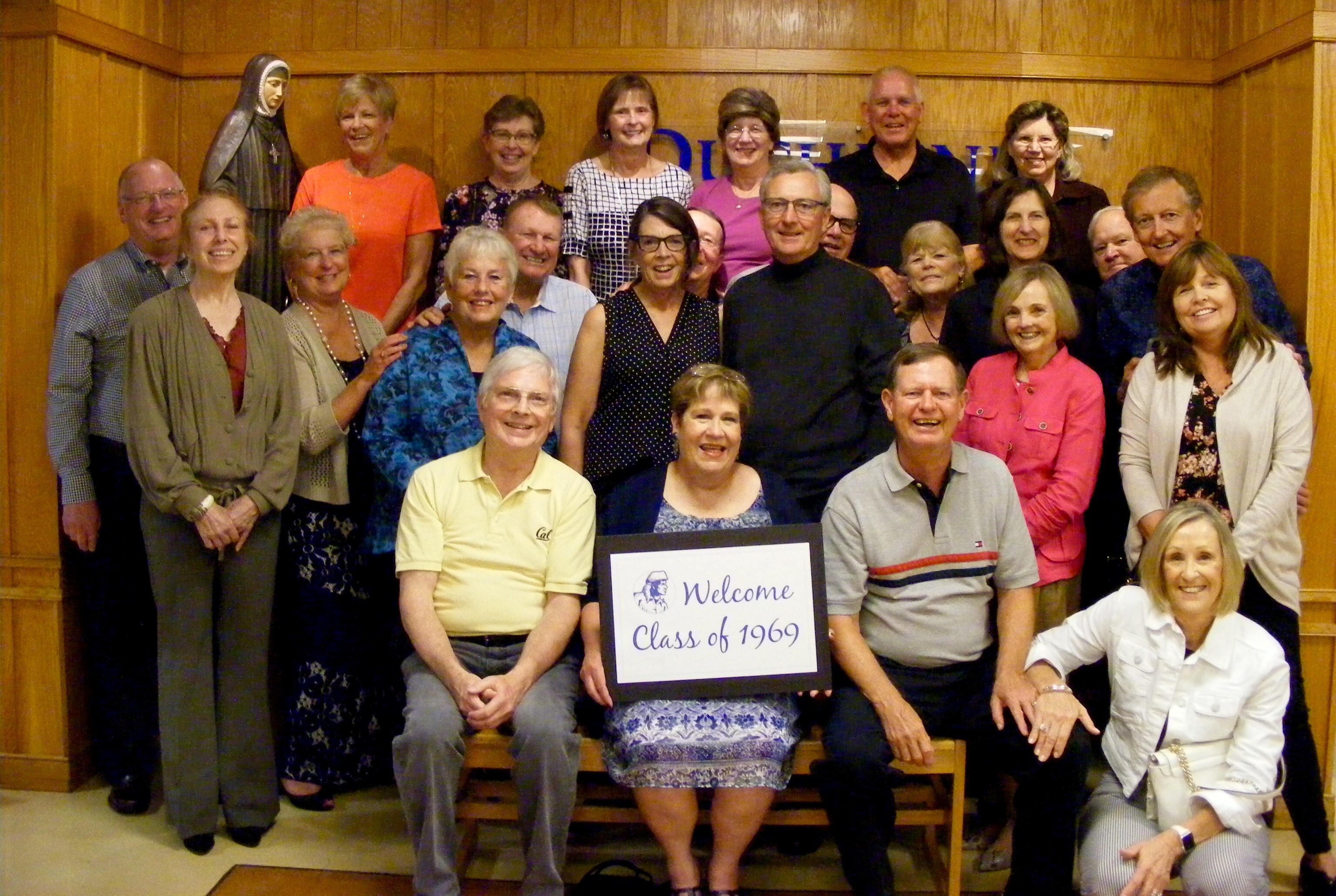 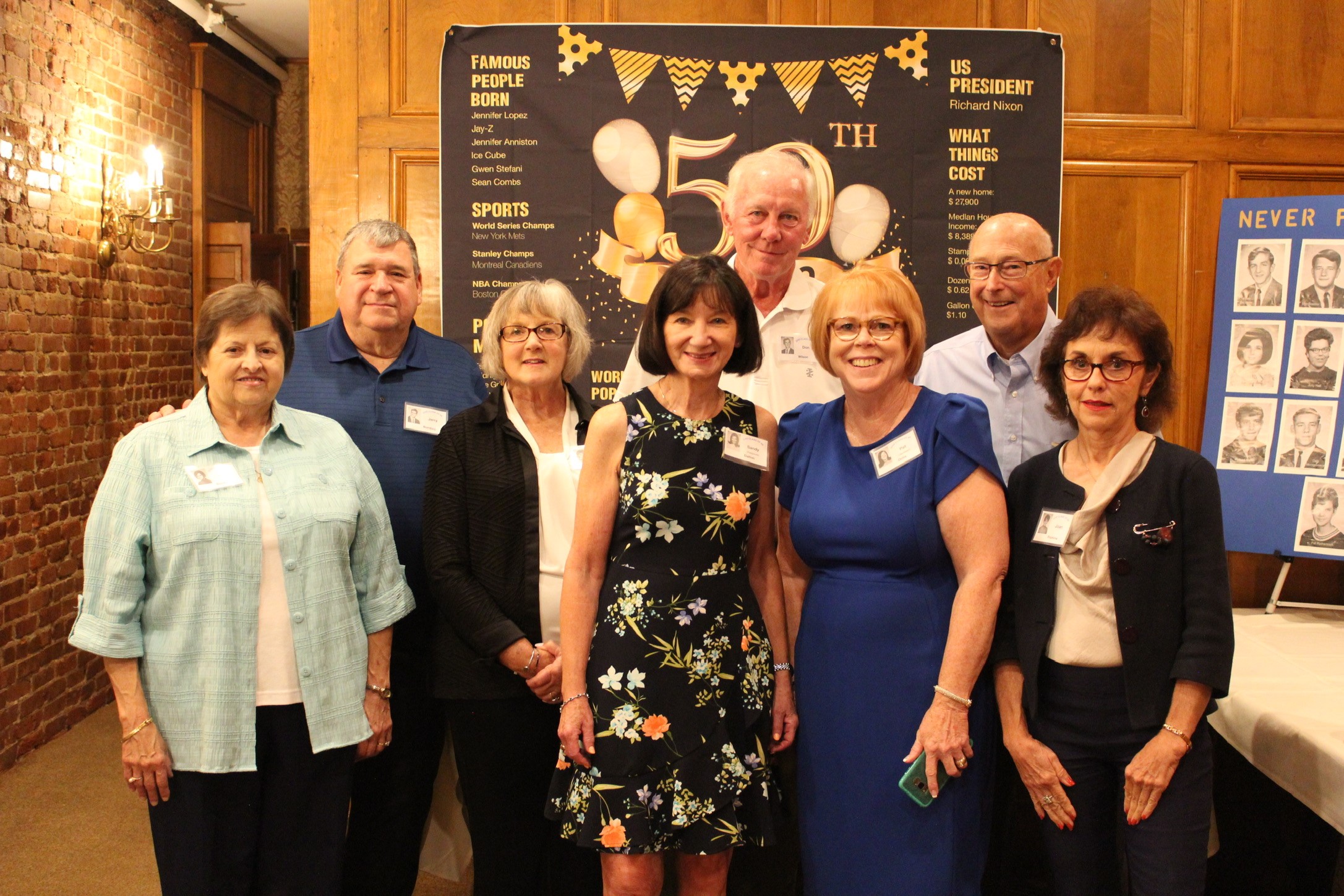 Thanks to all who made the Class of 1959's 60th reunion in the DHS Library on Saturday, September 7, 2019, a resounding success!!  Kudos to the organizing committee, as well as to Duchesne's Outreach Club members who helped on the big day. 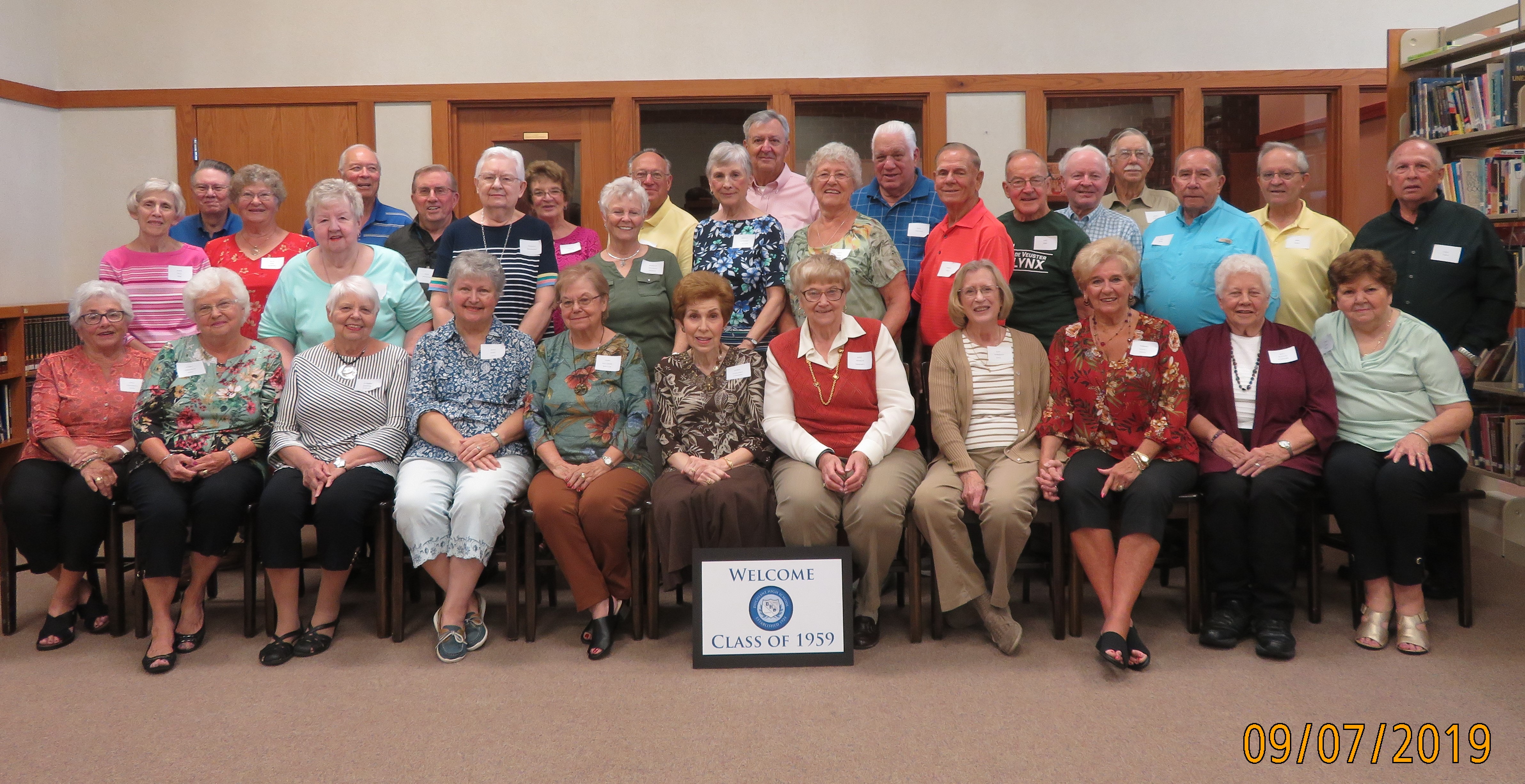 Thanks to our unofficial official school photographer Mike Schoen for capturing this great group photo -- our 2009 state championship soccer team together with the 2019 team, which became this year's state champions.  The teams were together on April 2, 2019, when 2009 team members came back to Duchesne to be recognized and celebrated.

We had a great night celebrating the 1984 State Baseball Champs at Blanchette Park on Wednesday, April 10,2019.  Such a nice evening reminiscing with players, coaches, and families.  Thanks to all who came out to join the festivities and honor these alumni.  (See the group's 1984 and 2019 team photos below!) 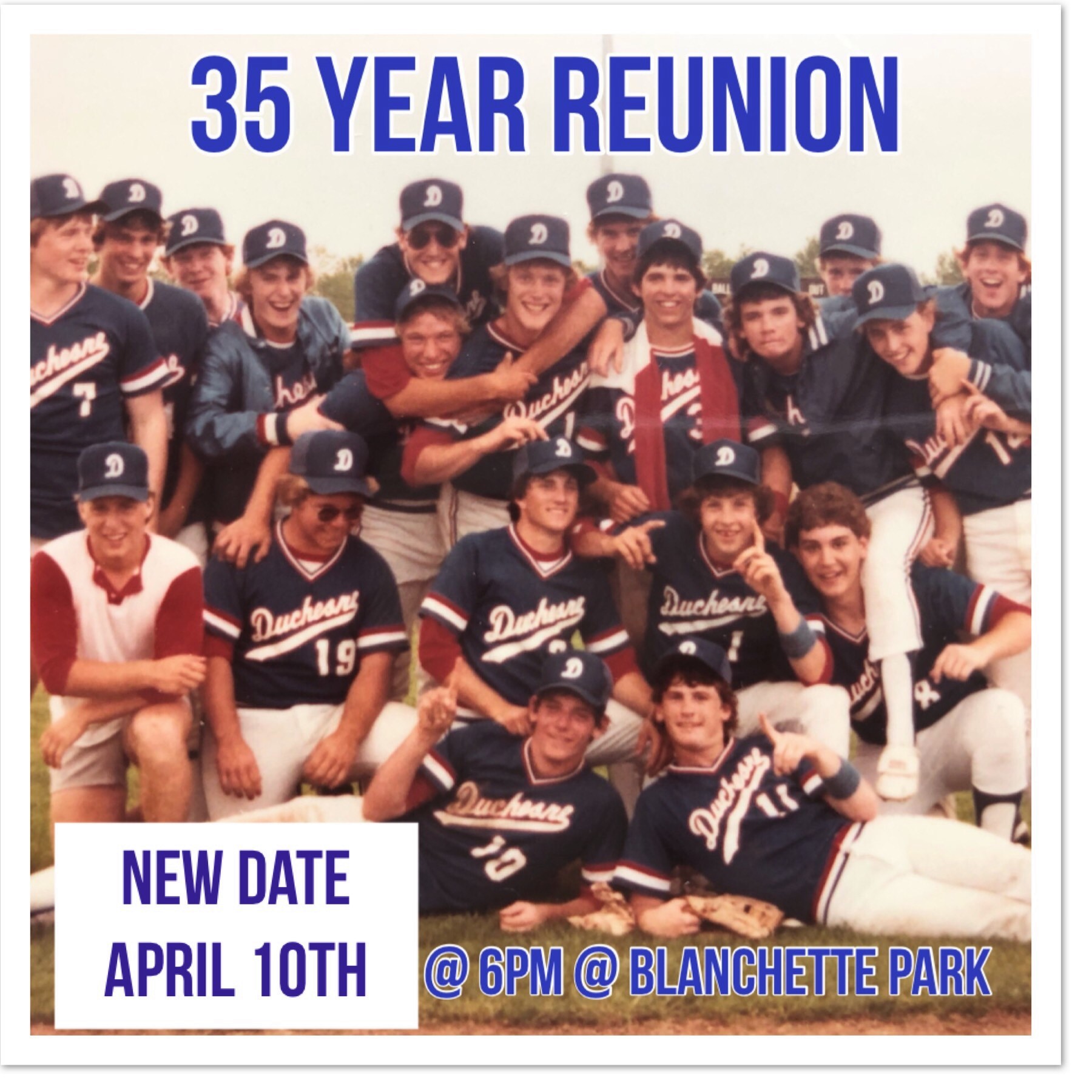 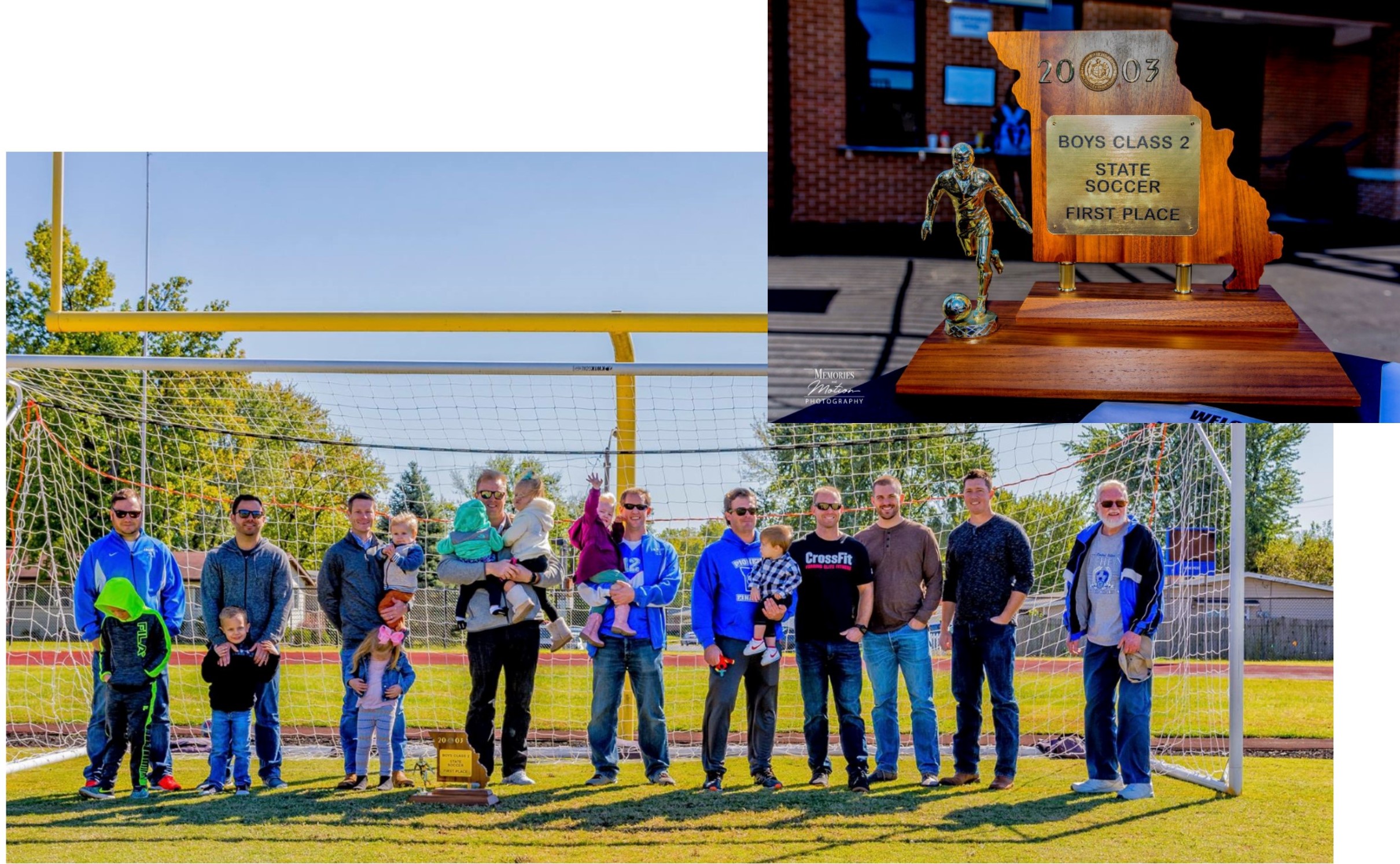 The Class of 1978 gathered at the Knights of Columbus Hall in St. Charles on the evening of Saturday, October 13, 2018.  A terrific turnout resulted from the efforts of a robust committee headed by Bill Elmendorf and Tim Hollander.  Many thanks to the whole team!

To commemorate their 40-year reunion, the Class of 1978 is making a group-funded gift to Duchesne for tuition assistance.  "With our common bond as alumni of DHS, we have all benefited from our education received, faith formation developed, and friendships made.  We were supported by the donors who went before us, so let's continue the tradition by contributing to help Duchesne's current and future students," said Bill Elmendorf, class vice president.  To date, $3,450 has been donated toward this class gift.

The Class of 1958 enjoyed a luncheon in the DHS Library on Saturday, October 6, 2018.  Many thanks to classmate Bonnie Beall for both organizing the event and making all of the food!!

Those in attendance but not pictured: Ken Artcras, Larry Oetker, and Tom Zerjav.

The Class of 1973's reunion on Saturday, September 22, 2018, began with a Mass celebrated by Fr. Tom Santen (right).  The classmates then enjoyed a wonderful evening together in Duchesne's PAC, which was beautifully decorated by the amazing reunion committee.  Thanks for all your great work, Team '73.  Thanks to all who came out to join in the fun! 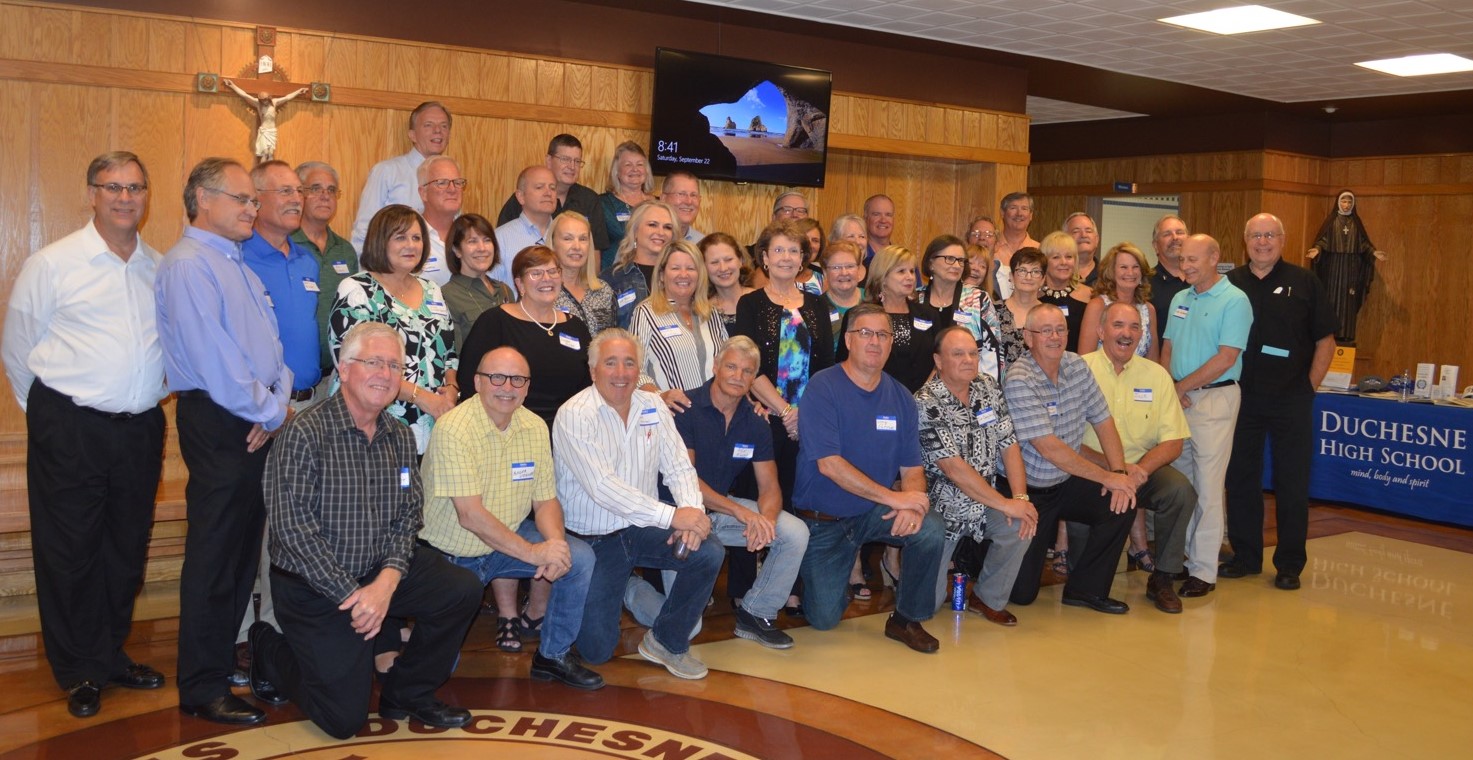 The Class of 1998 had a surprise visitor at their 20th reunion, held at the Grand Opera House on Main Street in St. Charles on Saturday, September 15, 2018, where they enjoyed a signature drink called "Pioneer Pride," appetizers from Tony's on Main Street, and dessert from Grandma's Cookies.  Each guest took home a DHS coozie and a photo strip of their class pictures from freshman to senior year.  Andrea (Ledwon) Covilli did a beautiful job planning the event, which attracted alumni from as far away as Seattle [Stephanie (Brennan) Fox], New York [Hugo Takacs], and Florida [Tina (Thomure) Blanco].

Many thanks to Pat McDonnell for all of his time and efforts in planning the Class of 1988's 30th reunion, which was held in Duchesne's PAC on Saturday, August 18, 2018.  Pat planned a great party, complete with a DJ, photo booth, school tour, Trading Post display, great food, and even better company! 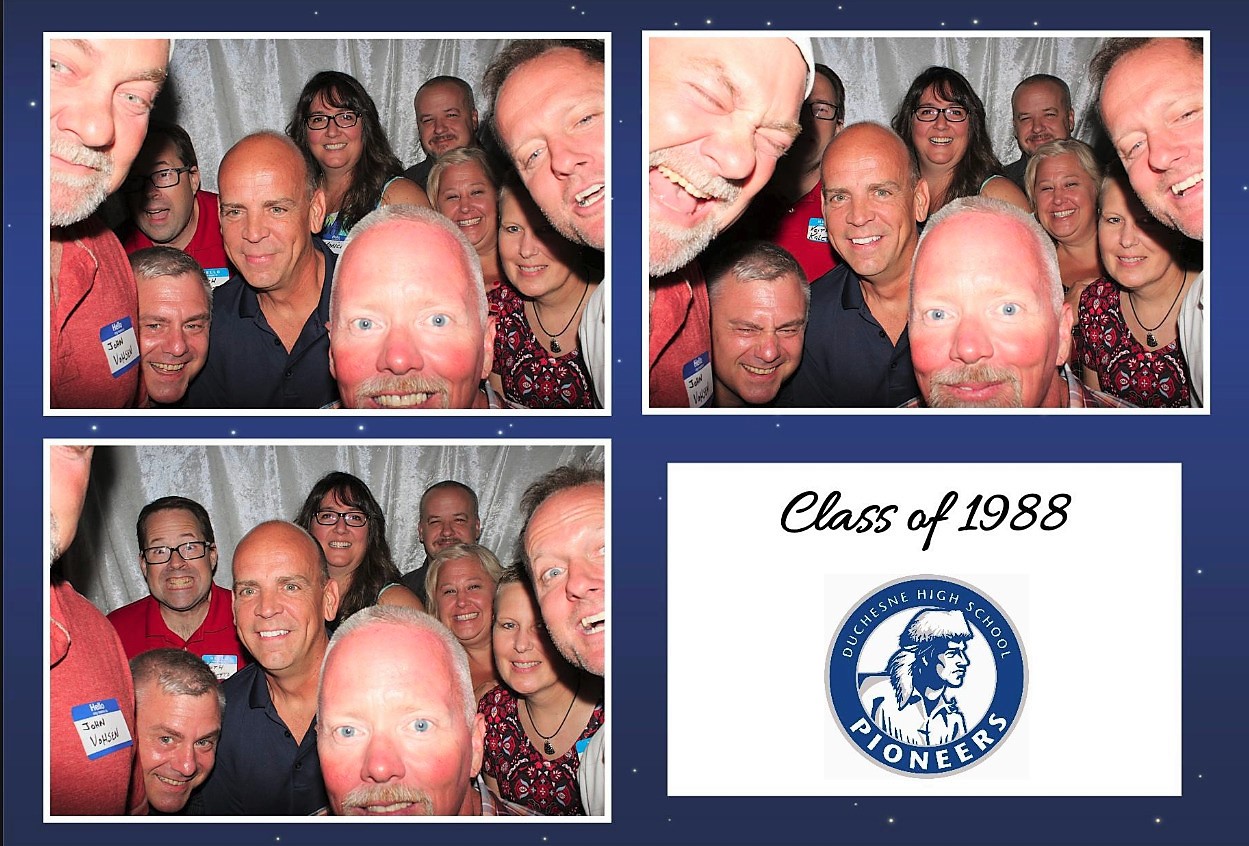 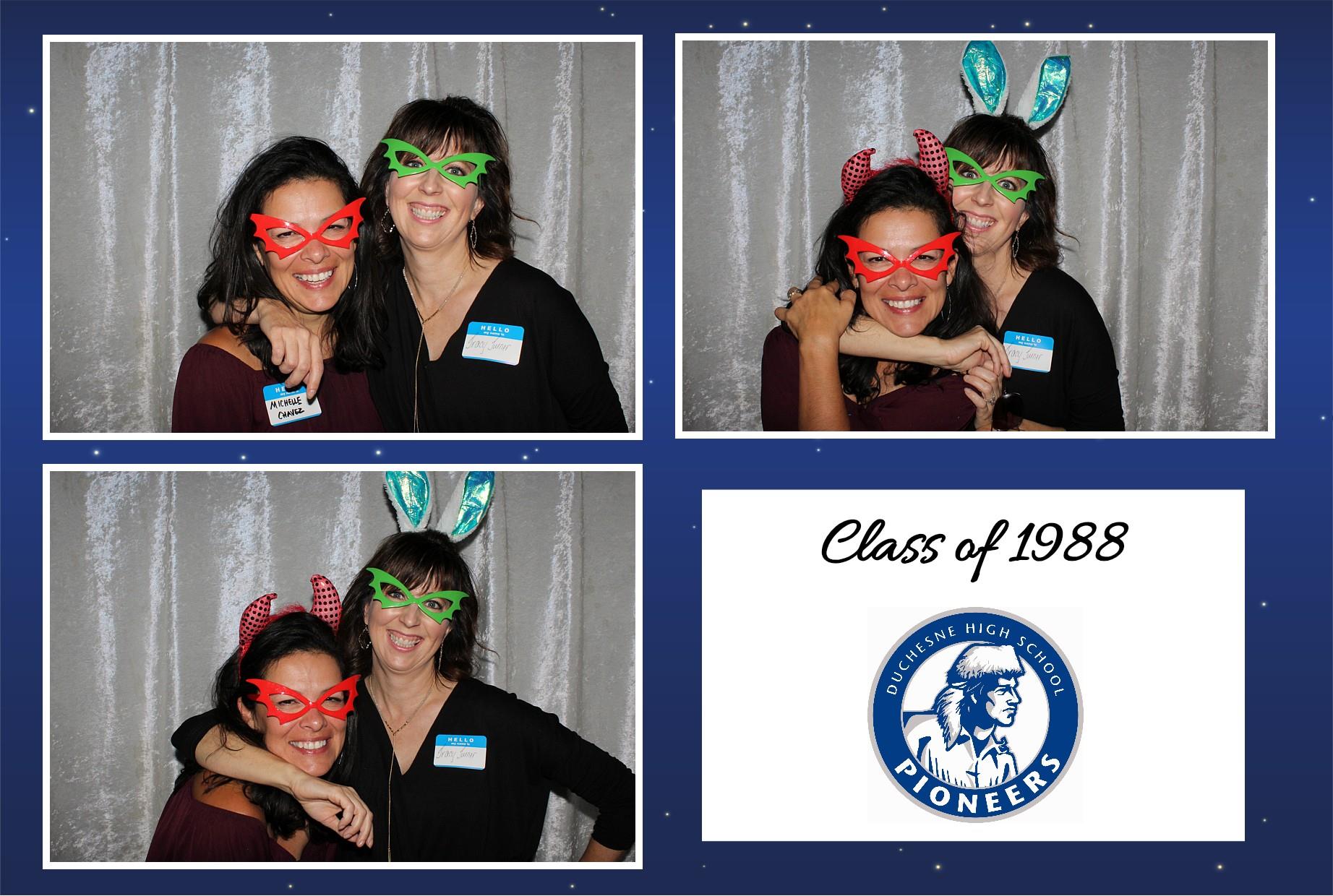 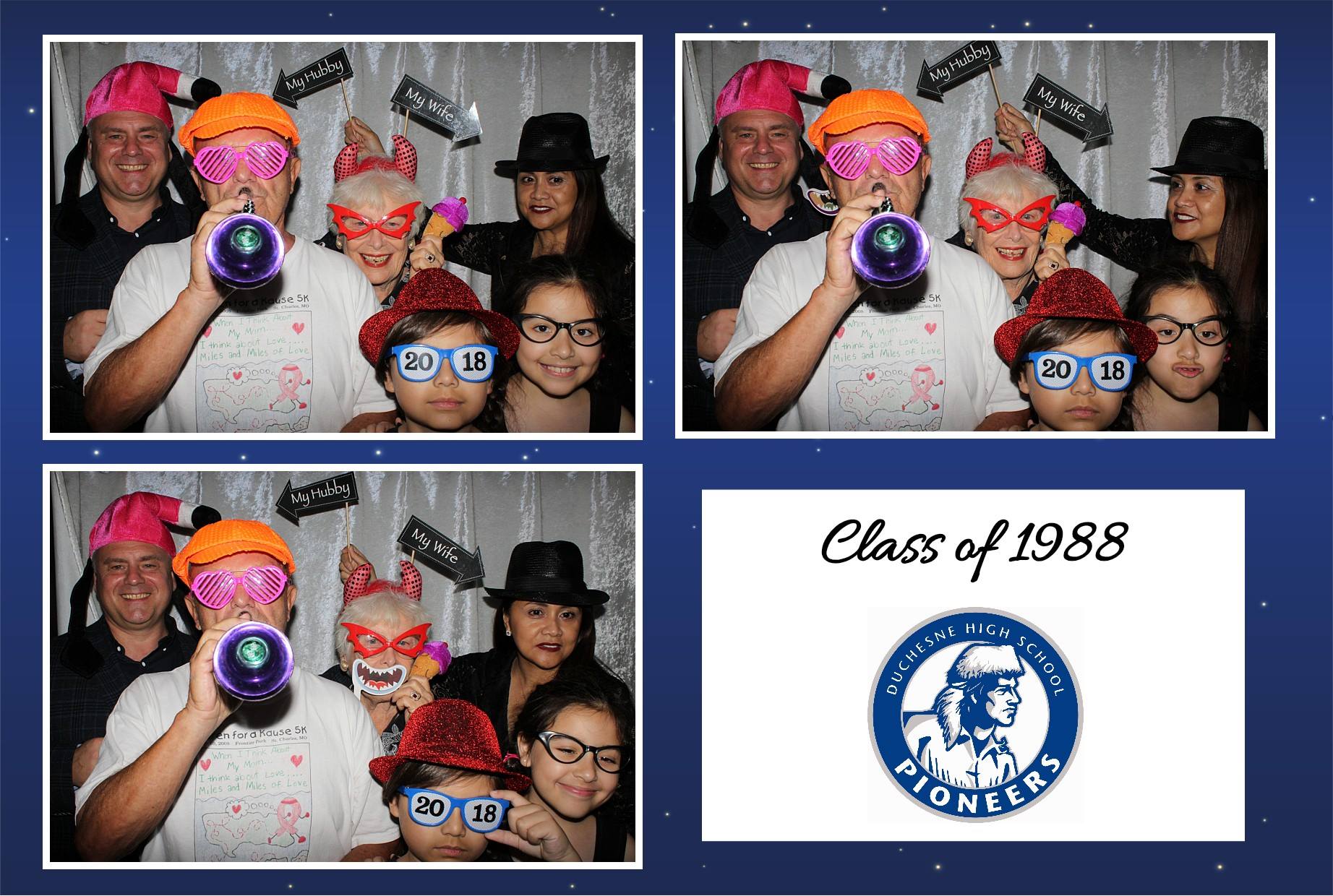 (Pat's family helped to test out the photo booth)

The Class of 1968 had a great time and a great turnout at their 50th reunion on Saturday, August 11, 2018.  In fact, they had so much fun that they forgot to get an official reunion photo of all in attendance.*  Thank you to the many alumni who contributed their time and talents in planning the party!

*Some classmates attended a pre-reunion warm-up on Friday night at the "(Bob) Boschertown Beach Bar & Grill," where party pics included the following: 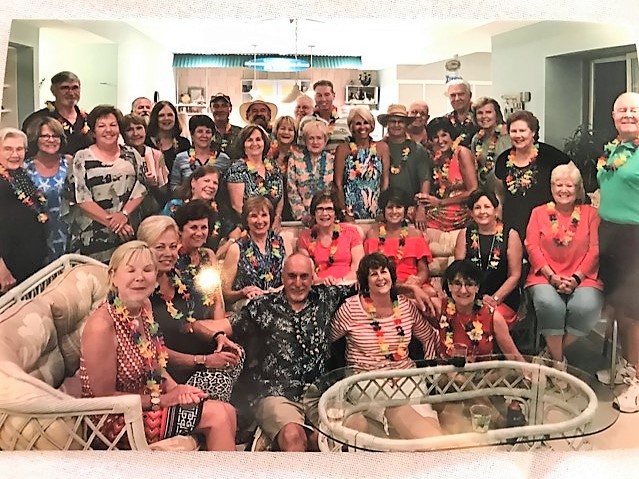 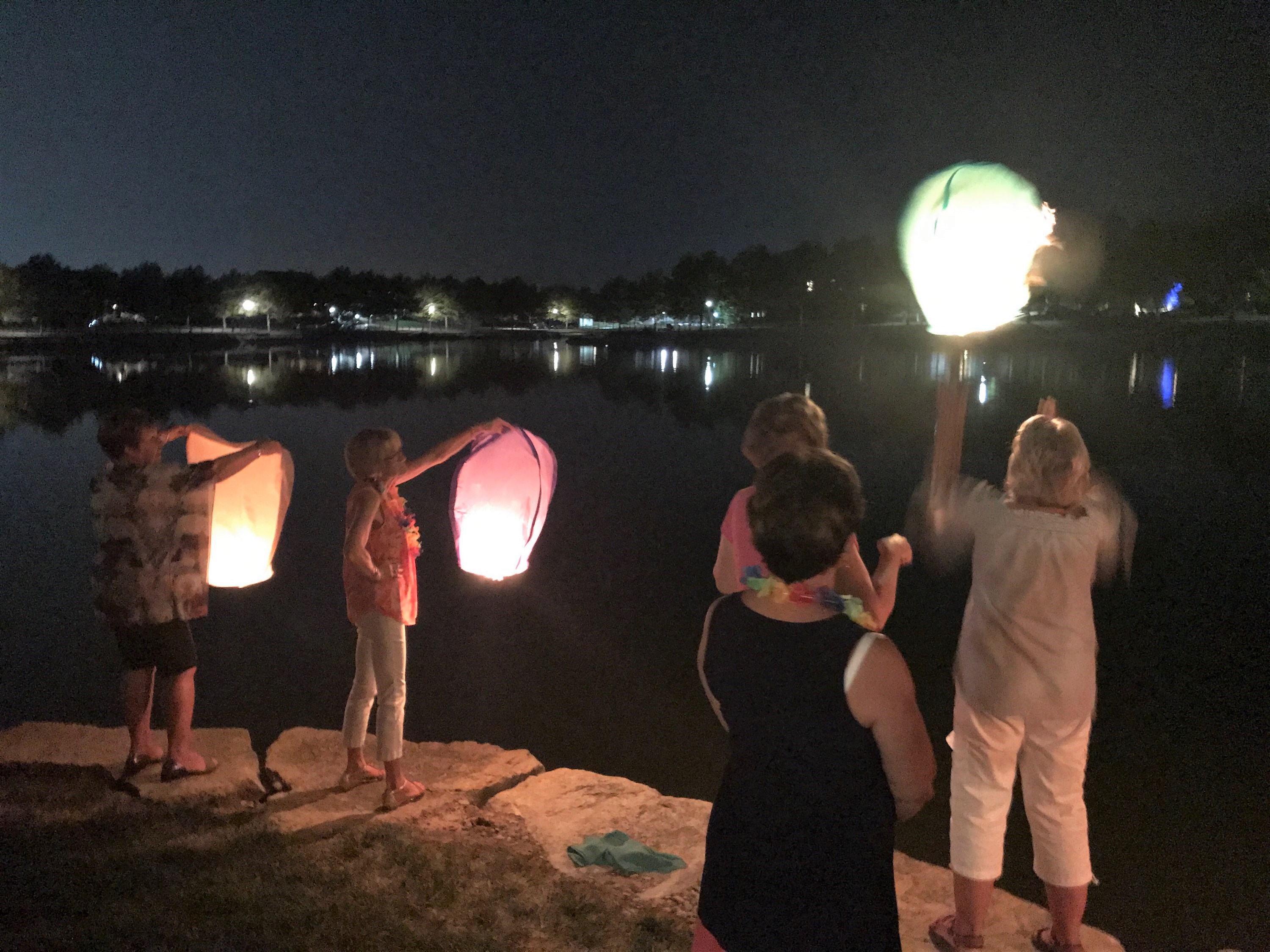 Tribute lanterns were released in memory of the Class of 1968's 14 classmates who have passed away.

The Class of 1972 celebrated their 45th Reunion on Saturday, April 7, 2018, at DHS --with Mass said by Msgr. Bob Gettinger, followed by a school tour, followed by a warm and wonderful evening together in the PAC (aka "the old gym").  Thanks to the committee of Joyce (Stahlschmidt) Berkowitz, Cathy (Wucher) Boschert, Tim Genz, Margie (Cook) Russell, Mary (Shea) Stephens, and Mary (Abeling) and Tom Thoele for all of their time and efforts in putting this together! 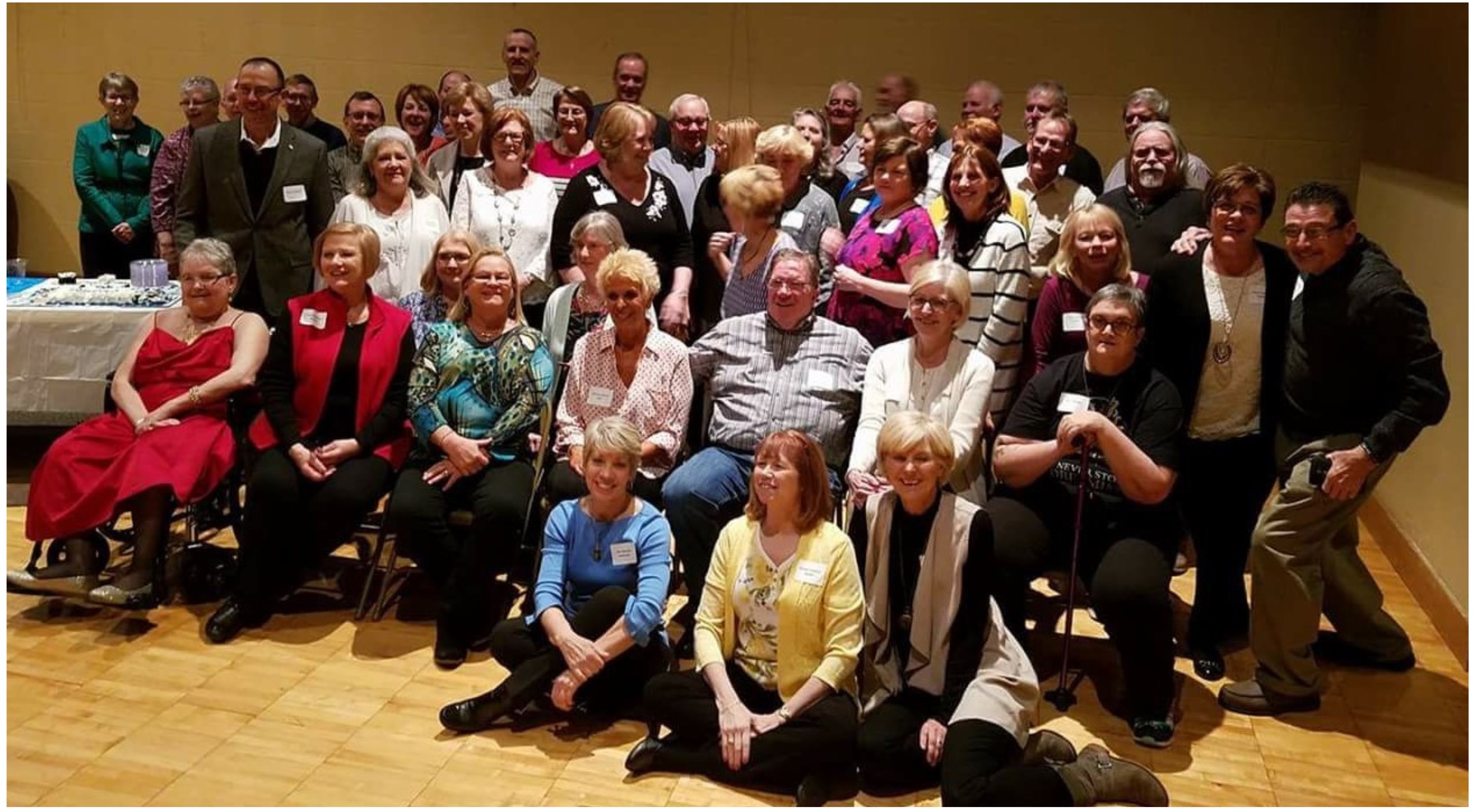 The Class of 1957 had a good showing at their 60th reunion afternoon gathering on Wednesday, October 4, 2017.  The group met at the 28/65 Brewhouse in St. Charles.  Richard Fetch came the farthest distance; he traveled from San Antonio, TX.  Marlene (Wussler) Anderson in California and Carol (Zerjav) Ingraham in Washington state were there in spirit even though they weren't able to get back to St. Charles.

Thank you to head football coach Charlie Elmendorf '76 for planning a wonderful weekend celebration of Duchesne's 50 years of football on the weekend of September 29-30, 2017.  Pregame festivities included a BBQ hosted by the Duchesne Athletic Boosters.  As many as 75 captains joined in the coin toss before Friday night's game, which was a winner over Christian HS of O'Fallon.  At halftime, about 2,500 people welcomed 300 former DHS football players as they were introduced by season year, starting with Don Schultehenrich '68, our first graduate to play the game at Duchesne. 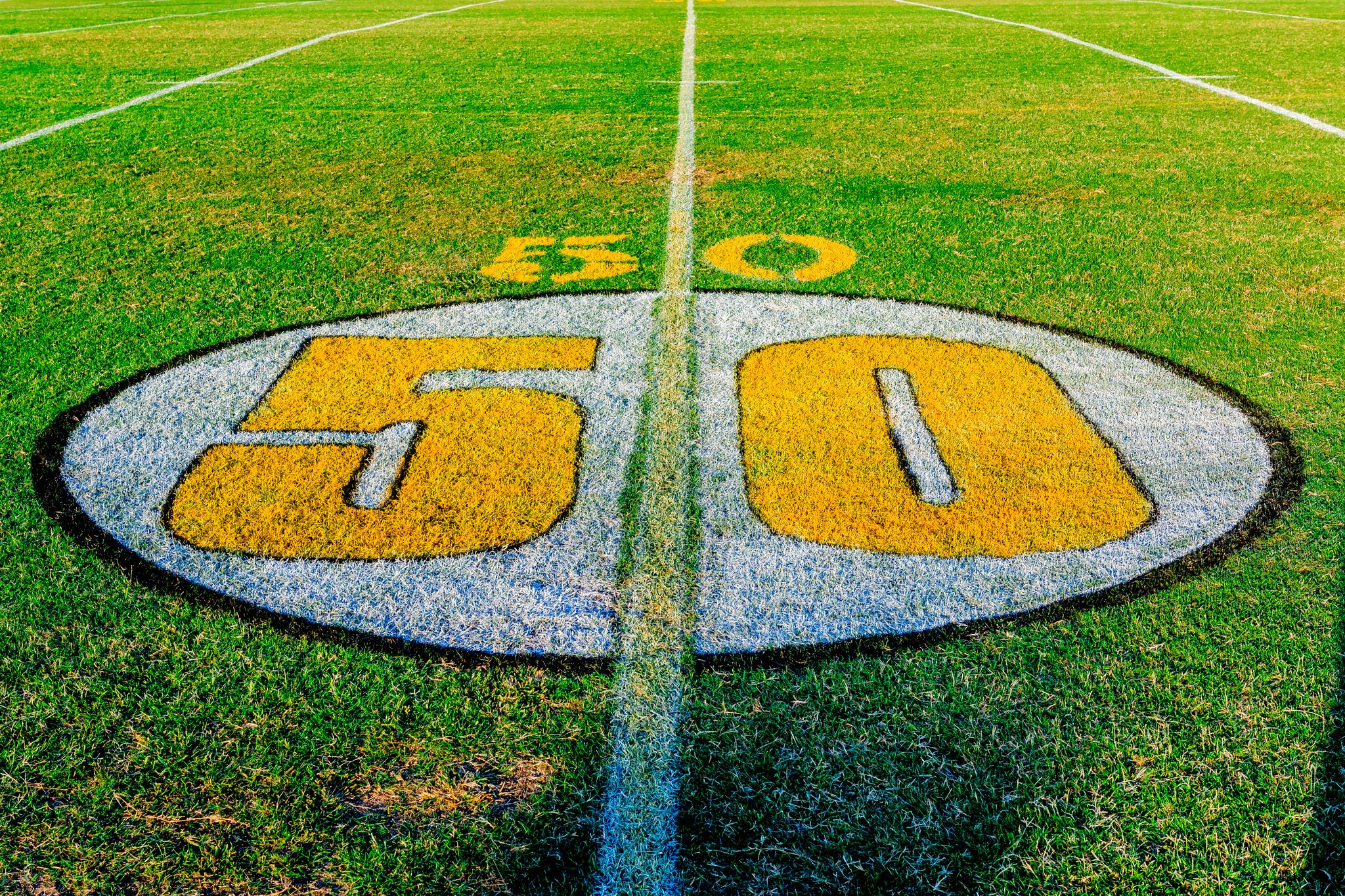 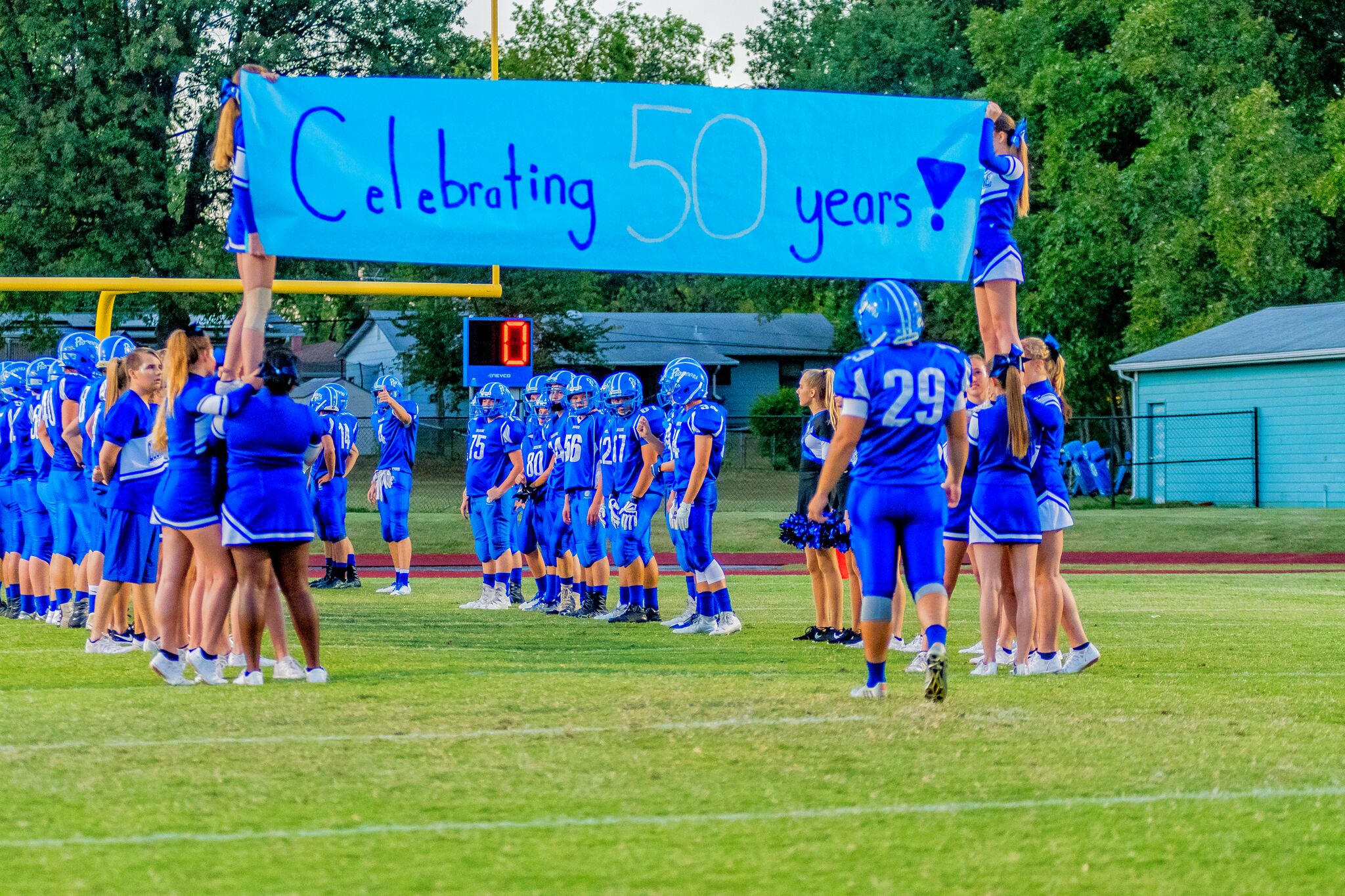 The Class of 1977 had a hardy group at Duchesne's 50th anniversary football game on Friday, September 29, 2017.  On Saturday, September 30, 50 classmates gathered at the Knights of Columbus Hall in St. Charles for a 40th reunion party. 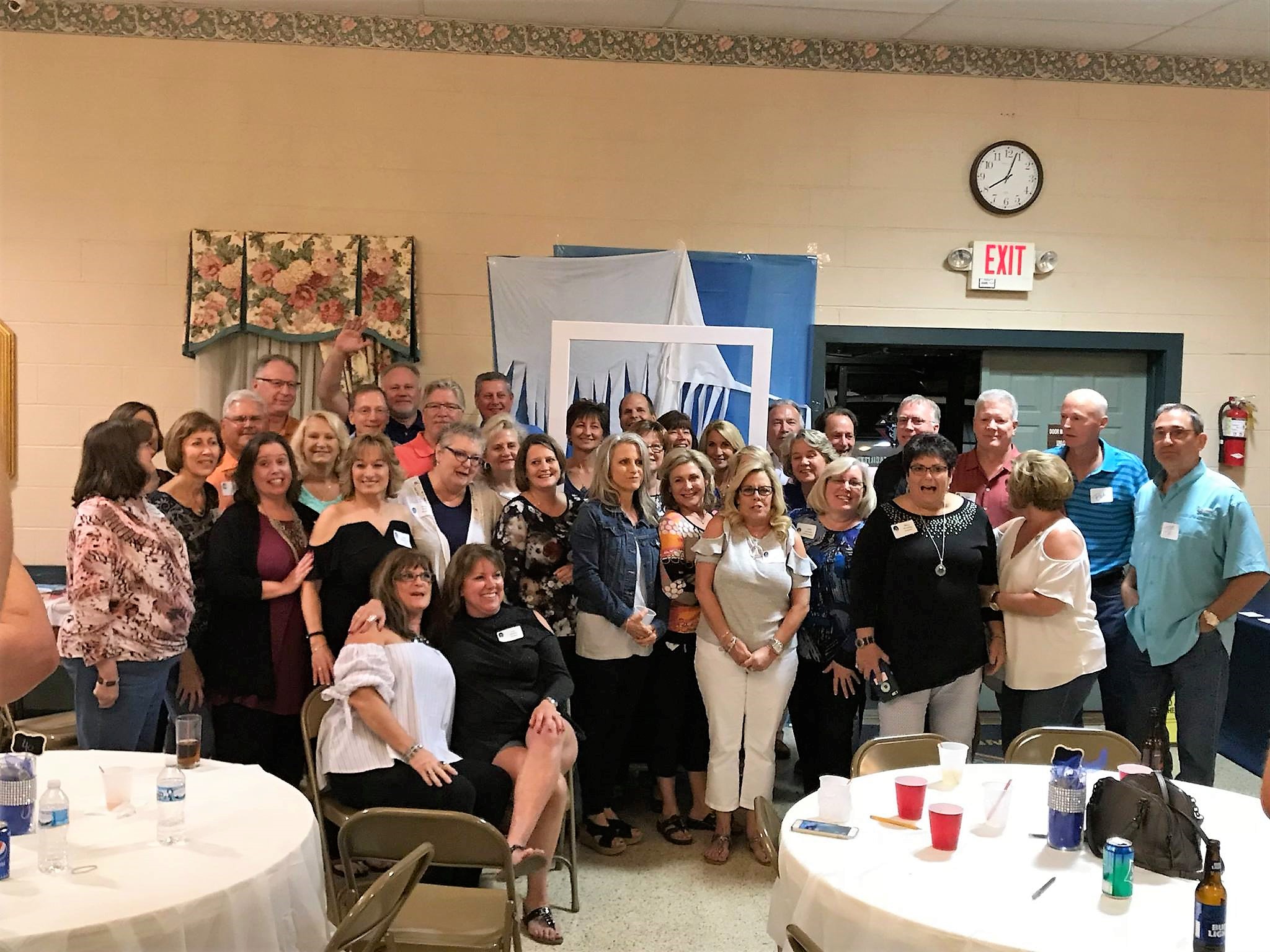 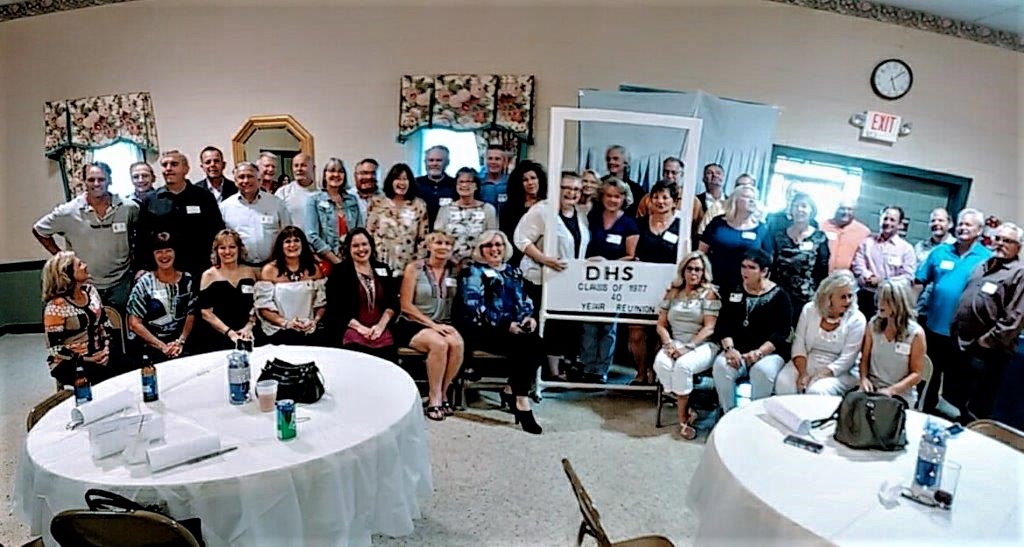 The Class of 1967's "That Was Then and This Is Now" themed 50-year celebration was held on Saturday, September 16, 2017, at the Knights of Columbus Hall in St. Charles.  A good time was had by all as they enjoyed a dinner menu featuring local restaurant favorites from 1967, starting off with Noah's Ark Clam Chowder and finishing with a dessert of DQ Dilly Bars.  A trivia contest was presented consisting of highlights from the 1967 Cor Duchesne yearbook and locations of businesses now and then.  It was a thoroughly enjoyable evening! 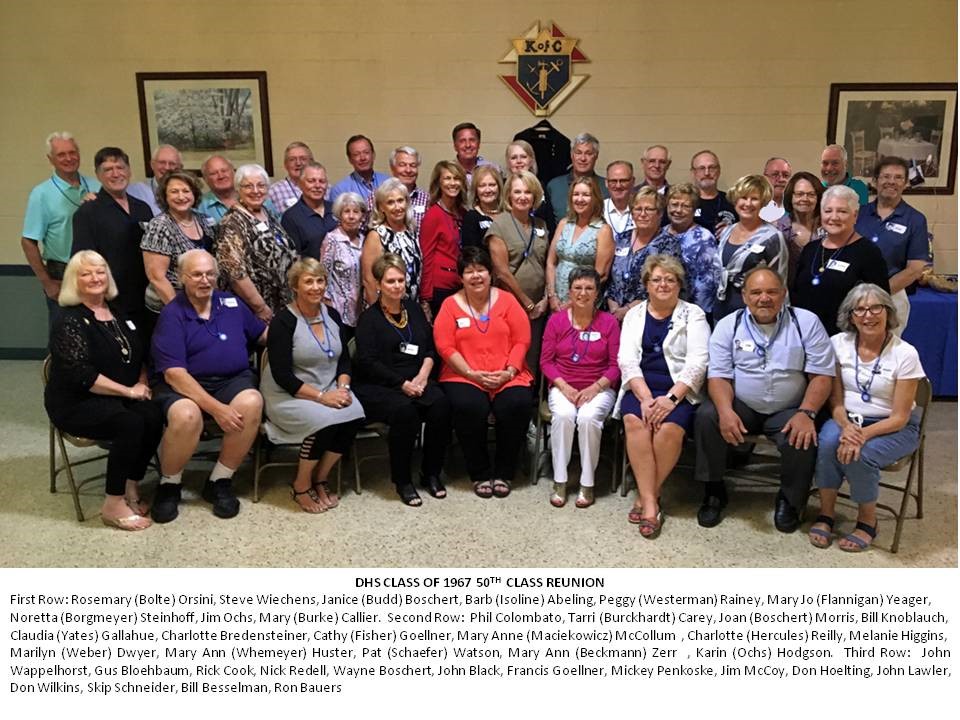 The Class of 1997 had their 20th anniversary reunion on Saturday, August 26, 2017, at the Grande Opera House on Main Street in St. Charles.  Thanks to everyone who came out to join us! 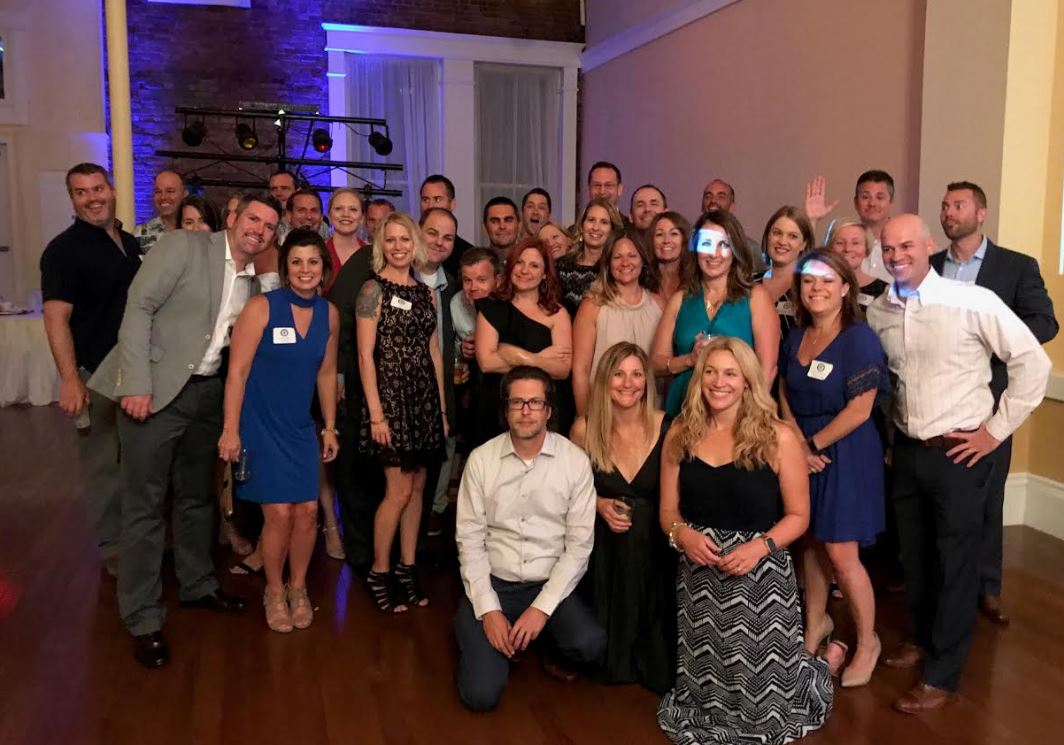